Thought to myself last night... "alright... BestBuy and Future shop both have the most systems available, but they're gonna be gong shows. People will be showing up like... yesterday."

And sure enough... that's the way it was. Cruised by BestBuy at 8pm November 18th, and about 15 people had already gathered by the door.

Talked to an employee who said it still wasn't nearly as bad as three days earlier when folks began lining up 2 days in advance for the PS3.

So I could have started there, laid some roots, and been guranteed a system after a good night's wait.

But I'm getting too old for that shit. I wanted to go home. drink some beer, watch a movie, read more Wii reviews, catch a few winks, and find a way to get a Wii even after all that laziness.

Not having the funds, nor the moral ineptitude to pay a homeless person upwards of $500 bucks to wait in line for me, (as many reportedly did for the PS3) I decided to make stop by Superstore on Grandview and case the situation.

But there wasn't anyone waiting outside.

Nor was there when we swung by at 1:30 am on our way back from some midnight poutine on the drive.

So after a bit of discussion, we decided to take our chances, grab some shut-eye, and see what the early morning held in store.

Alarm fired off at 5:00am, and after a couple good snoozes, we were on the road.

Pulling into the Superstore parking lot minutes later, I was immediately impressed with the 12 folks in front of me who had devised the same low-key plan.

Here was a collection of calculating folks. Some looked like they had been there for some time, (deluxe lawn-chairs, time-passing laptops, and even the odd heat lamp.)

But most looked like they knew they had struck the right balance between not having to spend an entire night outside, and still getting their system, day-one. 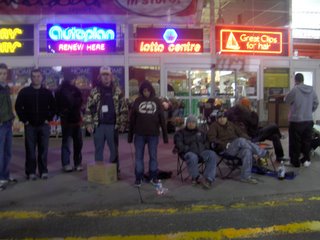 The three young fellas in front of me said they had been there since 3:30 am... and they were starting to look a little fatigued.

3 more guys showed up 20 minutes after I arrived. We got chatting, and it soon donned on them that only two of them were going to go home with a system. That problem ended up getting solved twice over, as the three fellas in front of me were only getting one system between them... and again when the clerk came out at 7:00 announcing that there were in fact 18 systems in stock.
A few late-comers at the end of the line went home as the clerks handed out 18 numbered cards and told us we could take off and come back at 9:00am when they opened. One fella put out an offer to buy someone's card, but when when he turned down the only offer of $200, it looked like the order was going to stay the same.

For our part, we went to Bino's for breakfast, card in pocket, which was now numbered 11. So we were well within the limit. 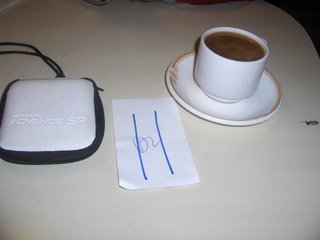 After breaky, we returned to Superstore by quarter after 8... just to be safe... and by then, another sizable line had gathered.

Apparently no one bothered to tell these poor souls that all the systems were already spoken for.

A clerk finally came out at about twenty to nine, to announce that, without a numbered card, no Wii could be had... however, no one left. 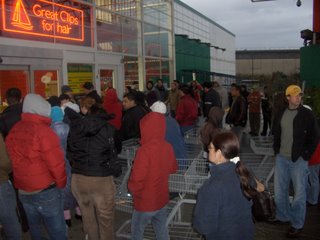 By quarter to nine, pretty much everyone from the original line had appeared and began to congregate around the doors. Those without cards seemed even more determined to get a Wii... and some seemed convinced that the entire "numbered-card" scheme was a hoax to convince them to give their spot up in line.

Much to their displeasure, at 9:00, a door was opened up a few feet wary from the one the new latecomers had lined up at... and it appeared at first to be a free-for-all, as customers elbowed their way in... some hopping shopping carts and checkouts to get to the electronics department first.

Those of us with cards, however, strolled in casually, and took our place in the separate line set up for those who had endured the cold, the rain, and a good portion of the night before to get our new Nintendo.

Within 15 minutes, the system was sold out... and despite the large number of disappointed folks, no riots took place. 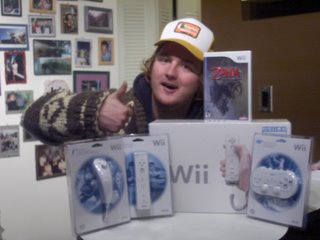 The final price tag? With a Wii system, the new Zelda game, two extra controllers, (one of them sold in two separate pieces) the entire thing came to $490 and change (CDN) Still well under the before tax price of the microsoft system, and certainly Sony's new PS3

So now on to the gaming!
Level completed by Unknown at 9:42 AM

Hey man remmeber me? the 2 guys in front of the 3 little fella, howz ur Wii doin

and we can trade console numbers!