This is a tough game to get through for a number of reasons. First & foremost being, it's everyone's least favourite of the entire series. The game never really had much of a chance to grow on anyone. It was never released in North America. Before producing the original Final Fantasy, Squaresoft had been notorious for releasing crap titles. (There's a reason you can't remember anything by them before the FF series.) Final Fantasy was one last ditch effort (hence the name) to save the fledgling software company for bankruptcy. So they dumbed down a few good elements from Enix's "Dragon Warrior" and hoped for the best.

After its surprise success, Square pumped out another nearly identical title for the RPG-hungry Japanese market. With a few more bucks behind them, Square decided not to push their luck in the -2D Fighter-dominated N. American market. As a result, us poor saps over here didn't se another Final Fantasy until part 4 was released for the SNES, (under the American title, Final Fantasy II)

The battle structure of FF4 was more similar to the original than the second installment was. And as such, by the time N. Americans finally had a chance to play a translated ROM file of the second game on a PC NES emulator, the experience-based leveling up structure had become standard fare for Final Fantasy.

FF2's leveling up structure is however, quite different, (and inherently flawed according to most retro game fans.) Instead of accumulating experience points after each battle, a character acquires higher stat maxes based on how much they exercise that particular skill.

This structure works quite well for gaining proficiency in various weapons and spells, and in many ways, laid the groundwork for many skill-building structures in RPGs to come. So for instance, if you're interested in becoming proficient with axes, you simple beat the piss out of as many things with your axe as possible, and before you know it, you'll be chopping faster than Paul Bunyan. Likewise, should you wish to have a more powerful cure spell... simply cast it whenever possible, whether your teammates need it or not if you're really keen. 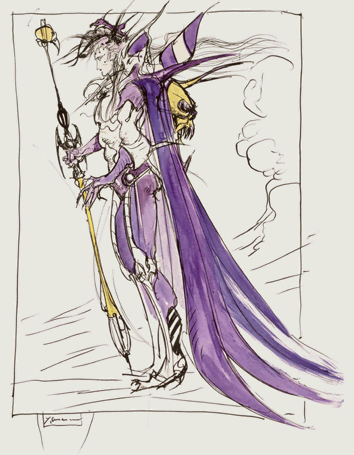 Gaining hit points and magic points is a tad more awkward. Instead of receiving higher maximums which every level increase, your HP max increases the more HP you use!. In other words, if you get your rear tossed by some band of goblins, and you're beat within an inch of your life... should you survive the battle, there's a good chance you'll have a higher HP maximum to show for it. Certainly a plausible approach to leveling up, kinda trial-by-fire-ish. The awkwardness emerged when players realized that a great way to achieve astronomically high HP maxes early in the game was to beat their own characters within an inch of their own lives each battle. Not likely intended by the programmers, and a bit too nutsy for most fans of the series.

Then of course there were others who failed to figure this part out completely, and had a helluva time jiving with the system at all. These types tended to be the folks who just couldn't get over their Final Fantasy instincts to keep their stats as high as possible at all times. Heavy-healers like this were never able to level up fast enough, and ended up throwing the game out in frustration.

Which is really too bad, as I found out today as I muscled through the final "pandemonium" fortress to the final boss in my Gameboy Advance remake titled, "Final Fantasy - Dawn of Souls."

Dawn of Souls is essentially identical to the previously released "Final Fantasy Origins" for the PS One, except that each of the two games included has a number of added bonuses. Extra dungeons in the case of the original remake... and a completely new game in the case of part two.

All in all, the game is worth plowing through if you're able to develop a groove for the q

uirky leveling system. The self-abuse quirk becomes self-policing later on as the enemies become tough enough that they do a good enough job on their own of draining your health without the need for any added assistance from you.

Similar to the original Final Fantasy, part 2 is light on plot... though not quite as void as the first installment. The characters in this game do at least have names, and there are many more NPCs this time round. This of course, comes at the expense of choice over character classes, a feature which again returned in Final Fantasy III.

The game doesn't skimp on adventure either. Three times did I find myself thinking I was at the end of the game, only to discover that there was yet another dungeon to delve into... yet another (and bigger) baddie to take on.

The third time, of course, was the additional content tacked on to the end of the GBA version. The story picks up from an earlier point in the game when a secondary character sacrifices themselves for the advancement of the party, (a Final Fantasy plot staple) and carries on with that character through their afterlife. Haven't got through it today, as I was killed within the first 5 minutes of play... so I'll let you know how that turns out.

With the updated graphics of the remake, however, a lot of the ungraceful aging, usually a major deterrent to would-be retro gamers, is removed, and when combined with the ability to save anywhere, anytime... FFII was a great way to RPG on the go.

So piss on the critics. This is Final Fantasy at its greatest. Before the series was invaded by emo-teen fuck-quats.
Level completed by Unknown at 9:54 PM