Too Much Billy Jean Will Kill You

It's always amazing putting the oldies up against their modern counterparts. 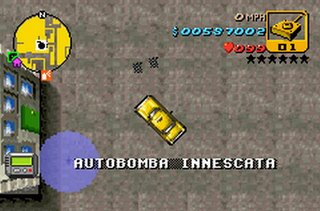 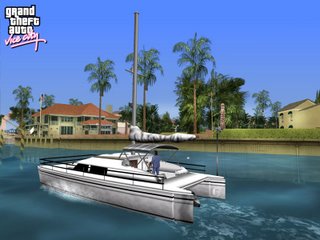 Now I'm always one to play the new ones well after they can be considered new, and I've been meaning to get my hands on this particular puppy for quite some time. I played around quite a bit with the original two installments. I've also worked my way through the GameBoy Advance version, which looks very much like a polished up version of the first photo I've posted on this entry. None of those early games were great for kids. All of them were entertaining. But to say that any of the newer versions would be suitable for junior, (GTA Vice City, San Andreas, etc...) would be a mammoth understatement.

These games ain't quite right. But goddamn if I can't tear myself 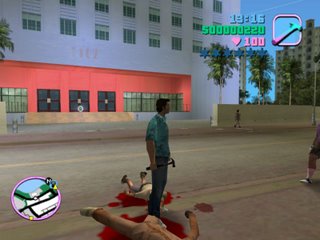 away from Vice City. It must be about three years old already, a couple sequels have come out since, but this game will go down in history as a milestone in the industry's history.

First off, it's an amazing period peice... particularly by game standards. It's pretty tough to consider games in a medieval setting a period peice. So many of them started out that way. Predecessors of video games, Dungeons & Dragons, etc... were conducted almost exclusively under that backdrop. Vice City is arguably one of the first games to make the period of the game a central component of its appeal. Pink everywhere, fashions, slang, cars, architecture, the money, the coke... everything... nails the mid-eighties right on the button.

And the music, another milestone for the industry all on its own. Every time a vehicle is entered, whichever radio station the poor sap you jacked the car from was listening to, begins playing. And you can change the dial to pick up nearly ten other stations. Various genres of music from the mid eighties, along with some talk stations as well. And the latter are quite often the most entertaining. The game developer misses few opportunities in satirizing the McArthyism rampant in the era.

In addition to over nine continual hours of radio contained in the game, the player can import their own MP3's directly into the game as well... all of which are played through a custom radio station that can be picked up like any other. So you can pile in as many songs from the eighties, ( or any other era for that matter, ) as your hard-drive has use for, and the game will incorporate them directly into the action. Quite an amazing little step in customization. 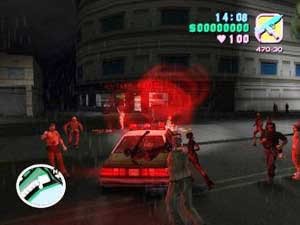 But even more outstanding, is the sheer number of unofficial additions and improvements that can be downloaded and incorporated into the PC version. A virtual army of volunteer programmers have created add-ons to the game from different costumes, to additional vehicles, weapons, missions, etc. Most noteworthy, is a completely unofficial expansion to the game... created completely by amateur game designers, and available free of charge on a number of different sites called "Long Night." Haven't played it yet, but word is the mod alters the entire game, changing it from your run-of-the-mill coke-sniffing, town-running, miami vice knock-off to an out-and-out zombie-thon. 20 new missions are added, and zombies take over the city. Zombies of course, improve any situation, and I can't think of any other way to improve what was already nearly perfect.
Level completed by Unknown at 10:45 PM