Sony's given me a few reasons to hate them in the past... most too trivial to put into words. But now the bastards have gone too far.

By suing the Hong Kong's online retail darling of the gaming industry (Lik-Sang) out of business for the most hypocritical reasons imaginable, they've cemented their position in video game history as the nastiest, most mean-spirited game-corporation of this decade, (perhaps all-time.)

Real video-game histiographers, (I totally just made that word up) might argue that Jack Tramiel's treatment of his Atari staff in the early eighties, or Nintendo's hard-nosed retail-exclusivity tactics later that decade, provide strong competition to Sony for the coveted title of: Sludge-Sucking Game-Rat of All-Time; but when you type the words: "Sony Sucks" into a search engine... you start to realize that Sony really is in a class all to it's own. And it extends past their video game department.

I've assembled a few articles with which you may pass the time.
and best of all... what you can expect after plunking down a cool $700 for Sony's new "state-of-the-art" system.

Combine the above video with many of the experiences consumers have had with Sony's unique definition of "warranty," and it becomes clear how buying a PS3 is paramount to putting $700 worth of toonies (Canadian $2 coin) into a gigantic fruitcake in hopes that it'll taste better at christmas time.

This isn't to say that Nintendo's hardware is perfect and without flaw. It's just more realistically priced. After paying under $300 for the base system, I began experiencing a few hiccups in the Wii's operation, (see here for system review.) After a week of minor load problems, and strange disc drive clicking, I phoned up Nintendo and explained the problem. The operator agreed to send me a new console in the mail, no questions asked... and then explained that they would allow me 21 days to transfer data between the consoles, and send the defective one back. Ironically, all of the earlier malfunctions in the initial console have ceased, and I wonder if it was just experiencing some settling pains out of the box, and has since found it's groove. 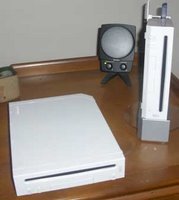 In any case, here's a photo to prove Nintendo sent the console, (which arrived on my doorstep 3 days after I requested it)

In the meantime... sign this petition titled The Case Between Sony and Lik-Sang.com
Level completed by Unknown at 11:23 AM