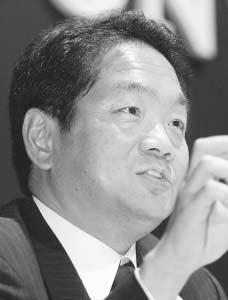 Looks like Sony's finally figuring out what I could have told them months ago. The PS3 is gonna end up costing them more money than they can ever recover before the bean counters begin calling for the axe.

In a move Sony says will "strengthen" their management team, Playstation brainman, Ken Kutaragi found himself laterally promoted, as the higher ups decided some fresh blood should take over their gaming division.

Here's a few reasons why this spells desperation on the part of Sony.

After a record like this, you don't simply move Mr. Playstation to another department and say you're "strengthening" you management team in doing so. This is a guy who was widely favoured to take over Sony's entire operation. And now he's been tossed out of the house ken built.

If this isn't a sign that Sony's on the ropes, then I don't know what is.

So far, no new shipments of PS3's have been made available, and Sony has barely been able to get out half of what they projected was necessary for this period.

Nintendo on the other hand, is claiming it's on track towards it's 4 million unit target by the end of this year. Nintendo president, Reggie Fils-Aime was quoted last week as saying, "We sell everything we make, so it's simply a manufacturing thing now." If Nintendo is able to hit the 4 million unit mark by Xmas 2006, they will have sold over half of what it took the Xbox 360 over a year to do... in just over two months!

Meanwhile, Sony lurches on with major financial losses from their gaming division, added to a $180 million loss from last summer over their faulty battery pack fiasco. Only their cellular phone manufacturing division, 'Sony-Ericsson seems able to keep them afloat.

So will Sony eventually leave the gaming hardware industry with the PS3 as their last system?

It sure would be just cookies for bullying Lik-Sang into submission like they did.
Level completed by Unknown at 12:45 AM

You write about gaming corporations like you're writing about the revolution. The one problem is the side your rallying on is still a multinational multi-billion dollar corporation. Somewhere you lost your way :(

Nah... you really only know one of my interests, and only got to know that during a relatively short period in my life... Consequently, you view everything I do through that filter.

Perhaps you're right, but what is the filter, you losing your way? Ha ha ha.... oh, its only me laughing.

Anyway, saw this article about Gamer Generation re: Gamers Growing Up and thought of you.
http://www.1up.com/do/feature?cId=3155753

Hey man... that's a pretty good article. I'd say by now though... I'm part of the second generation of gamers to have "grown up." I suppose it all depends on when you define generations beginning and ending, and when you consider games to have taken off.

Though I am old enough to remember playing the Coleco Vision my dad bought me (himself) when I was 4-ish... I didn't really start playing seriously until the NES came out... and by then, there were already legions of Atari and Commodore gamers who were beginning to have kids.